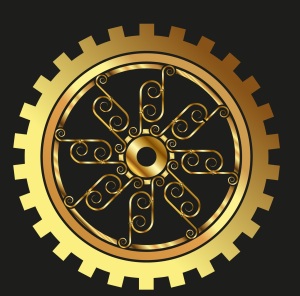 This is the third post in a series about Steampunk Worldbuilding.

If you’re a science fiction fan, you probably know that Luke only sold his speeder for 1600 credits, and Han wanted 8,000; so Luke and Ben compromised, paying 2,000 in advance with 15,000 agreed upon arrival in Alderan.

Han also had a price on his head “so large, every bounty hunter in the galaxy will be looking for you” – according to Greedo, that is. But that price was almost motivation enough for him to desert his friends and future wife to pay Jabba off. Good thing Leia takes care of that for him later!

I knew that my Steampunk world needed to include money in a big way. Why? Well for one thing, my hero, Cyrus, is a pirate. Why do people become pirates? They are societal outcasts for some reason and are forced to steal to survive. I also have a dominant form of government, the New Alliance, and a rebellion. My world has rich people, poor people, and everyone in between – and money is both a motivating factor and an explanatory factor for the things that they do.

When asking questions such as:

• Why is Cyrus a pirate? Is he a successful pirate – and what does that mean?
• Why is Evangeline a slave?
• Why is the New Alliance so powerful?
• Why isn’t the rebellion in power?
• Why would people spy for either side?
• Why wouldn’t the common people stand up to the government?

I always came back to one answer: money. Or technology – which lead me back to money. But asking the questions above were extremely powerful because they allowed me to build the back story for each of the characters, and to discern how important money was as a primary motivation for each of them.

To build my world, I used a lot of the concepts in the book, Grain Into Gold. I came up with the idea that there would be multiple currencies still floating around from before the First War, because it does take time to mint new currencies and the United States is still across the pond, so it would be the last to receive that currency and have its use enforced. Even if the New Alliance minted a new currency, there would still probably be private exchanges in other currencies for those who have access to international travel.

Interestingly, my father was a career history teacher and he explained that one of the problems with the U.S. when it first began was that every state was minting its own currency. This practice pretty much halted trade between the states until the federal government stepped in and forced everyone to use one currency. But it begs the question of what happened to each of the former state currencies. Were they traded in one-to-one for the new federal currency? Or did some states’ currencies count more than others?

Anyway, those questions are just for the trade of an expired single currency for a new currency. The nice thing about having multiple currencies is that you can ask questions like:

• What are the exchange rates between currencies – and how easy is it to exchange them? (I mean, a galleon may be worth $10.07 USD, but really, who is going to exchange it except Gringott’s – and what if you can’t go in there?)
• If someone was rich before the new government, would they still be rich after the takeover if a new currency takes effect?
• What happens when a currency becomes worthless?
• Would the New Alliance and the rebellion be using the same currencies? Or would one be worth more than the other?
• How could the either the rebellion or the New Alliance use currencies to their advantage in a war?

The use of currency allowed me to build a more realistic world, with characters whose motivations we understand because they still mirror our reality even though the world itself is very different.

The use of multiple currencies can give some amazing potential for economic warfare. What if one state’s currency suddenly becomes worthless? What if all currencies become worthless to the New Alliance but its own – and the ruler decrees the death penalty for everyone who can’t pay taxes that year?

I hope that this has given you some food for thought. In the fourth post, I will discuss mining in the 1850s, and how I used the mines and mine lords to give depth and realism to my world.