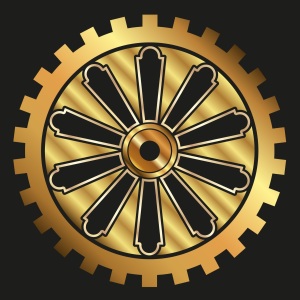 This post is the second in a series about Steampunk Worldbuilding. In this blog post I will tell you some of the themes of steampunk, as well as a bit of how I created my own world.

The first thing I did when my magazine submission was rejected (so I got serious about writing steampunk – damn you, competitive nature!) is research. I went to Barnes and Noble, because I was too impatient to wait for Amazon delivery, and bought Steampunk: An Illustrated History by Robb and The Steampunk User’s Manual by Vandermeer and Boskovich.

Those two encyclopedias went through the history of steampunk and the main themes: rebellion against a tyrannical government, individual freedom, and the equality of women being a few. There are also the sci-fi themes of new technology, discovery of new worlds or new frontiers, and encountering strange and/or dangerous unknown phenomena.

After reading, I began to think about the setting. I wanted a time and place in history that would have been interesting to write about, where many of these themes would have come up naturally. Most steampunk work is set in England, which is fair, since a lot of it the clothing and setting is derived from Victorian culture. But I wanted to provide a unique perspective on steampunk, and give my characters room to grow in a different setting, so I set the work in the United States.

I wanted the world to be a lot smaller than it is today – with a populated eastern seaboard but the west as a yet unknown frontier. A wild land that had yet to be fully explored would give me the opportunity for exploration, new technologies, and a lot of places for the rebellion to hide from a New Alliance. The mid-1800s fit the bill nicely in that respect – now I needed to build my government.

When you are going to create a world, probably the most important thing you need to know is:

Why do you need to know this? Well, the end of pretty much every epic story is the overthrow of the ruler, so you’re going to be building up to it over your series. It doesn’t matter if it’s the Emperor, Voldemort, the machines, or the Capitol, you need to know who the supreme ruler is. You don’t need to tell the reader all of the specifics, but as the author, you need to know them so you can give depth and breadth to your plot.

Going further, you need to ask questions about the supreme power and its motive.

2. Why is the supreme ruler in power?
3. How did it come to power? – Bloody battle between two powers? Multi-faction war? Economic overthrow? Superior technology? Did the opponents fight, or simply give up?
4. How does it keep power? – Fear? Economic means? Technological means?
5. Who are its allies?
6. Who are its enemies, and how much power do they have?

To create my supreme ruler, I began poking around the 1850s, and for some reason Russia came to mind. Growing up during the Cold War between the U.S. and U.S.S.R., I have always been intensely curious about Russia, its people, and its government. So I started reading about Russia in 1850, and what I found blew my mind.

In 1850, Nicholas I was on the throne, a ruthless, obsessive man who had crowned himself the Emperor of Russia and brutally quashed several uprisings from the people. While his reign saw massive geographical expansion, his view of himself as the ruler of an ethnically diverse people who spoke over 100 languages at the time was one of a benevolent dictator; although his reign was characterized by censorship, educational repression, and a fanatical devotion to nationalism.

The traits above made him the perfect dictator – but the characteristics that made him the perfect character for a steampunk story were that he was aggressive, land hungry, and trained as an engineer. He already had a million-man army, and it seemed the only things he lacked to expand his empire even further were sufficient transportation and technology.

I had the idea that if Nicholas I would have focused his engineering skills and the might of the people and the army into developing technology – steam-powered trains and railroads, airships, weapons, etc., perhaps he would have swept across Europe and into the west, creating a one-world government that was mostly bureaucratic but squashed revolts with its military might.

In my steampunk world, I gave him those technologies, and that’s exactly what he did. He brutally conquered most of the Northern hemisphere, creating the ‘New Alliance’ in the wake of his armies. I love the fact that the new government is called the New Alliance. When I was living in South Korea, I learned to appreciate the irony of the dictator in the North calling his land the People’s Democratic Republic of Korea, or the communist regime to the west calling their empire the People’s Republic of China.

So, that’s what I did to create the background of my world. I found the time and place, and then a man with the motive to rule it. I stretched my imagination to give him the means.

What I did next was to imagine the outcome of such a war, asking questions and creating my society from there. I will discuss that in the next blog post: Steampunk Worldbuilding II: Building Society and Social Problems.

Happy Endings – The Other Side

One of my good friends, paranormal author Tara Rane, wrote a blog in November on happy endings (found here: http://tararane.com/2014/11/13/happy-endings/). Highlighting the Divergence series, she argued that when a work falls into certain genres, there is an implied verbal contract between the author and the reader that there will be a ‘happy ever after’ for the main characters at the end.

I really enjoyed the blog, and to a certain extent, I agree with the concept. However, I think that someone needs to speak for the other side. For those people who understand the necessity of sacrifice for the greater good, and aren’t afraid to write or read about it.

I lived in South Korea for almost eight years, and one of the classes I taught was comics for the animation department, so this admittedly gives me a different perspective. Koreans, and perhaps Asians in general, along with many other cultures, are fine with heroes and heroines going to a noble death. They are fine with reading about it in books and comics, watching it on TV and at the movies, and talking about it. They view death matter-of-factly as a part of life, and can appreciate the fact that the hero or heroine had a fulfilling and meaningful life before their eventual demise. Movies like Crouching Tiger, Hidden Dragon or Anna and the King are often painful for westerners to watch, but they exemplify the idea that one can have great love, great passion, and do great things without having to have a happily ever after.

Some might argue that death is acceptable for adult stories, but that YA stories should always be happy. I think, as adults, we forget how much death we had to deal with in fiction when we were younger. One of my favorite stories when I was in kindergarten was called something like In the Blackberry Bramble. I picked it up a few years ago because I was in the kid’s section at the library and quickly read it again. Surprise! The one of the main characters dies from being attacked by bees and the other has to cope with it.

Bridge to Terabithia, The Outsiders, Where the Red Fern Grows, Old Yeller, Wuthering Heights, Atonement, Beowulf – I could go on and on about the books I had to read for class that dealt with death. There are plenty of movies where the main characters dies, Gladiator, V for Vendetta, and Donnie Darko, as well as movies which have also been considered romances such as Titanic, Benjamin Button, and Moulin Rouge. These deaths aren’t pointless, they serve to teach us about life; to force us to reflect on its meaning, our actions, and the relationships we have with the people we meet.

Of course, my genre, science fiction also lends itself to heroic deaths – we can look at the deaths of the heroines in the Fifth Element and Equilibrium, the T-800 in Terminator 2, Ripley in Alien 3, and both Neo and Trinity in The Matrix trilogy. Fantasy also has its share, Frodo goes to an early death in The Lord of the Rings trilogy due to his time holding the ring, and I still remember balling my eyes out when Moreta dies in the Dragonlady of Pern. These deaths teach us valor, bravery, and the understanding that it is sometimes necessary to sacrifice for something greater than yourself.

In my opinion, learning to deal with death is a part of life – and a crucial one. Everyone is going to die. The people you love are going to die. You are going to die. Better that we learn to understand it, and appreciate the lives that were lived before that moment. Fiction is one way to do this. In my opinion, we shouldn’t try to hide death in stories or reality from our children to coddle them – better to celebrate the dead in the traditions like Chuseok in Korea, the Day of the Dead in Mexico, or the multitude of Native American rituals that exist to give respect to their ancestors.

Unfortunately, many of us have gotten to the point where we can’t deal with it. We don’t want to see it – unless it’s just the villain or an extra on TV or in a fictionalized story. We don’t want to think about people dying…because that would lead to thinking of our own mortality. We want to separate ourselves from it, sanitize it, and hide it.

This sad obsession with hiding death, looking younger, anti-aging, means that we begin to fear death rather than looking at it as a passing over, as a reward for a life well-lived and a journey into the great beyond. By extension, we are now unable to appreciate martyrdom – which is perhaps the most definitive form of heroism.

Countless individuals throughout history have made that sacrifice so that the human race can be where it is today. It is the willingness to make the ultimate sacrifice that, for many, is their ultimate expression of love. The willingness to die for others is not simply a human trait. Many different types of animals will do this for their offspring.

So while I appreciate the idea that, in western fiction, the most common psychological contract that authors or movie companies make with customers is one that entails a happy ever after scenario; at the same time, I find it sad that we cannot appreciate stories which are closer to reality – stories where people do not survive a war or a plague, stories where mothers give up their lives for their children or both parents help their children escape while they perish. Stories that force us to find meaning in the meaninglessness that is real life.

GANDALF: End? No, the journey doesn’t end here. Death is just another path, one that we all must take. The grey rain-curtain of this world rolls back, and all turns to silver glass, and then you see it.

PIPPIN: What? Gandalf? See what?

GANDALF: White shores, and beyond, a far green country under a swift sunrise.

PIPPIN: Well, that isn’t so bad.